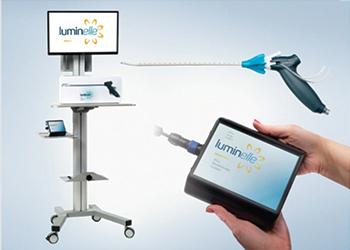 The LUMINELLE DTx SYSTEM IS THE SIMPLE AND COMPLETE SOLUTION FOR OFFICE HYSTEROSCOPY & CYSTOSCOPY
The compact, integrated LUMINELLE DTx System is all a busy practice needs to perform diagnostic and therapeutic procedures delivering OR Performance…Office Value®. The hybrid system includes a reusable scope, compact control hub, and a portfolio of sterile, single-use sheaths. The reusable, sub-2 mm scope utilizes the latest in high-definition optics providing a 50 mm depth of view. The compact Control Hub acts as a tower but fits in the palm of your hand. Each of the products in the sterile, single-use LUMINELLE RotoSheath Portfolio provides a 360° global view giving you the freedom to perform a multitude of diagnostic and operative procedures, without leaving the office.
The LUMINELLE DTx System is the ideal solution for office based procedures delivering value to patients, surgeons, payors, and health care systems. 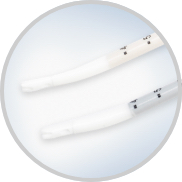 At only 3 mm in diameter, the diagnostic sheath is smaller than a pencil eraser allowing for easier passage and more comfort when traversing the cervical canal. The small diameter has the potential to reduce the need for anesthesia/analgesia for patients. The LUMINELLE Dx 360º Rotatable Disposable Sheath is a one-handed design that provides a full 360° view of the uterine cavity. 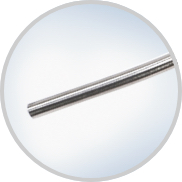